Check out the Daily Program below

Rick Stanfield is one of the few remaining traditional wheelwrights, a trade he learned from his grandfather. Wheelwrighting, along with blacksmithing, are now considered part of our past, bygone trades, essential only when the power of the horse reigned supreme before the Industrial Revolution. In the early 1800s, when animal power gave way to wind and steam power in the wake of the Industrial Revolution, the need for hand forged wheels for carts (cartwheels), wagons (wains), traps and coaches became less and less in demand.
It’s a lot of work to prepare for each wheelwrighting demonstration. Before each show, the hub, the spokes and the wooden felloes (outer rim) need to be prepared, taking many a long hours to hone, shape and precision dowel them strongly together.
During the show, a fire is built and stoked, ready for the steel rim. When the hot coals are just the right temperature, Rick and his team begin an almost choreographed “ballet” around the fire, masterfully rendering the rim malleable enough to be able to fit it tightly and permanently to the wooden wheel. The tossing of water starts and a constant cloud of steam billows. The sight and sounds of the wheelwright, working frenetically with his hot metal rim, the “chink, chink” of his smithy’s tools, the hiss and smell of the rising steam, are indeed evocative of another time in history.
At the event, also meet our harness maker & saddler, blacksmith and whip plaiter whose now rare trades also were focussed around and depended on “the heavy horse”. 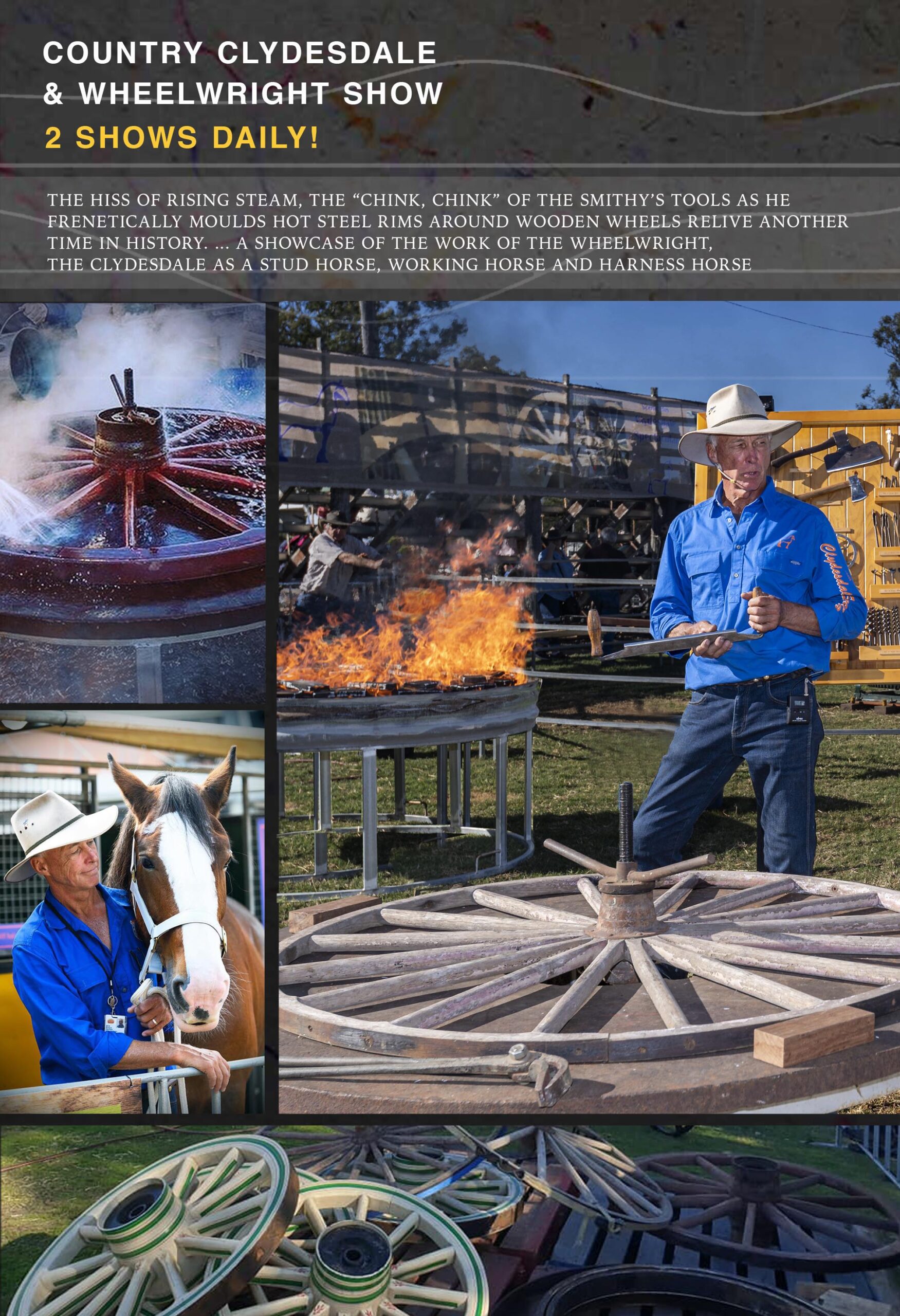 The Clydesdale Country Show not only showcases the horse as a stud horse, working horse and a harness horse but also presents traditional wheelwrighting demonstrations in 2 shows daily over the event.

The breed that built our nation

The magnificent and massive Clydesdale, the “gentle giant” of the horse world, is recognised in Australia as ‘the breed that built our nation’. Before motors, Clydesdales were our ploughs, tractors and workhorses. Bred in Scotland for heavy farm and industrial work, they were imported to Australia in the early 1800s as draught horses, for logging and agriculture. “They were absolutely vital to our farming back when there were no vehicles or power” says renowned wheelwright Rick Stanfield. These extraordinary horses drove the agricultural and industrial revolutions, fought in the First World War and influenced the design of horse-powered machinery and vehicles.

Rick Stanfield’ s family have a long history with the Clydesdale. “My grandfather worked them in Boonah” comments Rick, who hales from Boonah near Toowoomba.  He and his family have taken the reins from their ancestors, and now present the Clydesdale Country Show & Wheelwright demonstrations throughout Australia to keep this bygone trade alive. “Like any history, in order to appreciate it you have to preserve it. We try to educate people at the show about what the Clydesdale is all about, and to pay respect to the history and heritage of these magnificent horses.”

See how this magnificent horse powered our nation – 2 “powerful” shows daily that will surprise you! 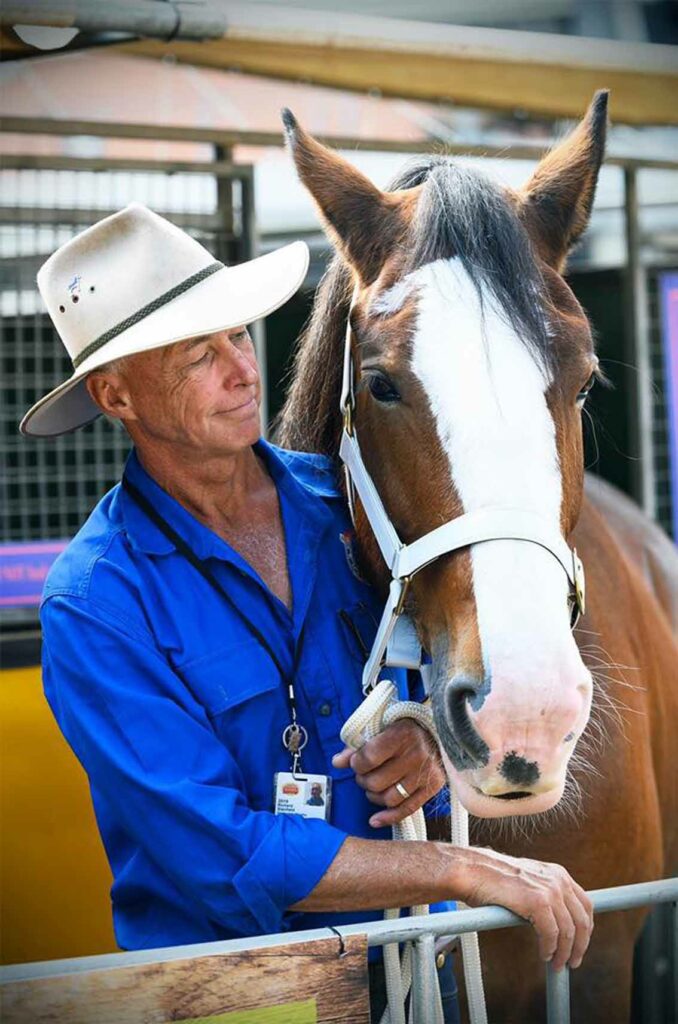 9.00am – Meet the Clydesdales! Meet’n’greet this massive work horse

11.30am Wheelwright Display – Exciting display with fire, iron & wood, with an educational and informative delivery explaining this rare trade.

1.00pm – 1.30pm Lunch time for the Horse, have a look at the static display while the horse refreshes

4.00pm Meet the Clydesdales – Public interaction with the horses.

9.00am – Meet the Clydesdales! Meet’n’greet this massive work horse

10.00am – Wheelwright Display – Exciting display with fire, iron & wood, with an educational and informative delivery explaining this rare trade.

1.00pm – 1.30pm Lunch time for the Horse, have a look at the static display while the horse refreshes

– It took a century for the Scottish to breed the Clydesdale into a workhorse so perfect it changed the course of history
– In 1911, one highly prized stallion sold for the equivalent today of $1.6 million AUD – a record that is still unbroken
– A horseshoe for a mature adult Clydesdale weighs approx 5 pounds, making it four times the size of a thoroughbred race horse’s shoe.
– Clydesdale horses are listed as a “vulnerable” species, according to the Rare Breeds Survival Trust Watchlist for 2016, with fewer than 5,000 left world-wide 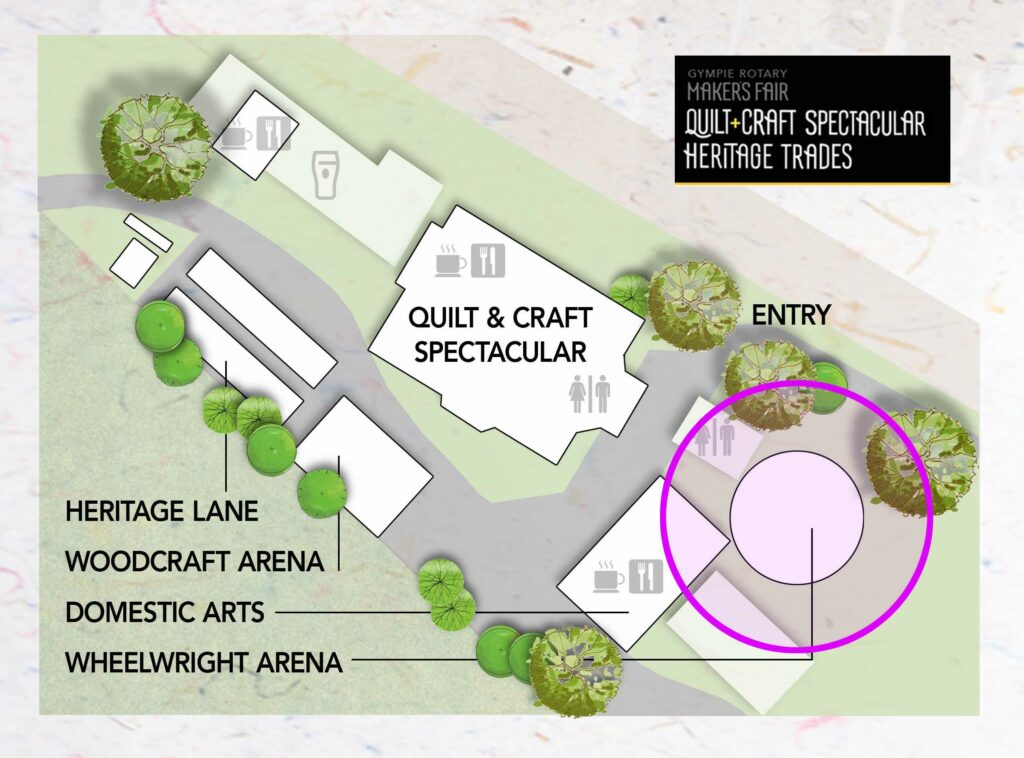